Andreas Bathory vampire, has opened up about the longstanding traditions of his native Romania and also explained the phenomenon of Moroi and Strigoi, otherwise known as the ‘living dead’, click here to see more and talk with a Vampire >>

A vampire has opened up about life in Transylvania and how ‘real vampires’ are much different than the ones you are used to seeing in film and television, claiming they walk among us, often undetected.

Andreas Bathory has previously revealed warlord Vlad Tepes visited him in a dream, and spoken about life in the grounds of Bran Castle in Transylvania. Now, speaking to the Press, he has opened up about his ‘vampirism’ – including the peace he finds from sleeping in a coffin – and his hope to open a hotel for others like him in Transylvania.

„The modern vampire community is now very focused on the ‘material nature of life’and based upon human instincts like sexual practices, human emotion,” he explained. 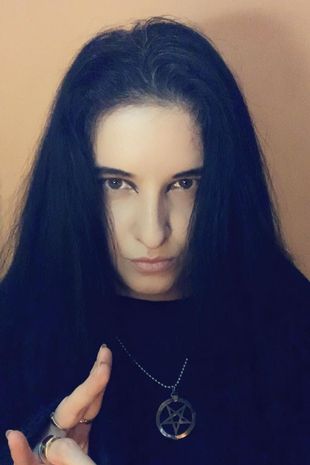 „But we here in Transylvania for many centuries are searching for more than merely human nature and human desires and lusts.”

He was clear to emphasise he has „nothing against” the practice others choose to follow, even if they do not share his own focus on tradition.

Andreas follows a number of traditions that many of us might recognise from folklore or legend. However, he says he does not drink blood and discourages people from this due to it being a „dangerous health risk” and a „dangerous spiritual practice”.

As such he says blood isn’t actually needed to keep a vampire alive as it is merely a „metaphor representing the living force of life” that was taken from mythology.

Conversely, vampires also need not fear sunlight, crosses, garlic or mirrors, according to Andreas. But some do still enjoy sleeping in coffins, including Andreas, who claims the practice helps him to connect with unseen forces.

He said: „I have a beautiful new coffin and I am thinking to open soon a small hotel for vampires here in Transylvania. The experience for other people can be incredible and at the same time, it can be a therapy for those who are afraid of death.

„Because of my mobile work, I sleep in my coffin when I want some peace and quiet or to meditate and recharge for a few days. During the years I made a vast researching (sic) of the existence behind the veil and this sleeping in a coffin practice, staying days after days in cemeteries, helped me connect with many unseen forces.”

Andreas went on to explain how within the vampire community, ” there are many hierarchies of varying levels of evolution”.

„Vampirism involves many stages or levels. There are that kind who are very close to the human nature. They try to adapt a specific style and try to escape from reality by playing a role, or some of them are living within a fantasy,” he said.

„Others are born with the capacity to take the energy from other people and many of them are doing it unconsciously.

„Another category are those who are living by practicing a vampirism as a spiritual path, but in the same time, they are involved in a combination of human traits, who are vampires ‘sometimes’ and humans at other times. They float between the two natures of being.

„Then there are those with very real gifts and powers of a higher vibration. These are the category of vampires who eventually recede from the public and from the vast human population and they usually do this because their level of understanding and vibration it is very different from the rest of the world.

He added: ” Even in our modern days, in many parts of Romania, people complain about things happening and they usually call a priest to ask for help. The priest and the elders of the villages will take a white horse to the grave of the recently deceased supposed Strigoi and they lead the horse to the edge of the grave. There the horse, after a series of prayers, is brought to the edge of the grave, where if the horse crosses over the grave without reaction, it is thought that the grave is not one of the undead and it is left alone.

„If however the horse rears back and refuses to cross the grave, then it is believed to be the place of the undead, or the Strigoi. Or, if you will, a Vampire.”

For Andreas, he says his vampirism is strongly tied to his connection with historical figure Vlad Tepes, or Vlad the Impaler, who inspired the vampire when he came to him in his dreams.

„For many people in Romania, he is a hero. He is the ancestor of numerous people here and many feel this connection to him as do,” he claimed.

” His spirit is still alive here and for me was an awakening that the unseen world was opening some gates for me and from that point I started to pay more attention to this world that exists behind the veil.” Reflecting on the dreams, he added: ” The vibration of his messages in these dreams was so powerful that it changed everything for me.”

Despite his devotion to tradition, Andreas admits he cannot always be upfront about his vampirism.

„I do not talk with anyone I meet about my vampirism. To do so is very dangerous. It requires people of a very high-level of understanding. I keep these things to myself and those few who are in my inner-circle and these people are usually those with gifts and powers themselves,” he revealed.

And he claims there are many more vampires like himself, who move through society but go undetected.

” Humans playing vampires and Vampires playing humans is a true state of affairs in our world and many real vampires, when they move in and throughout society, they will never be seen. This is their strength,” he adds.