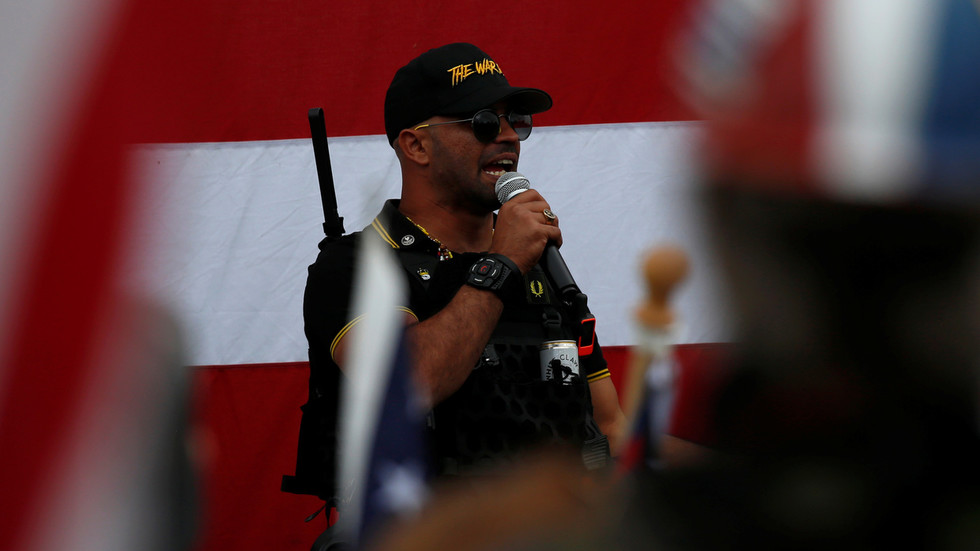 Forget getting canceled on social media platforms, try losing your access to money. That’s what Capital One bank has reportedly done to Enrique Tarrio, leader of the controversial group Proud Boys, by canceling his credit card.

Tarrio’s credit card, which he had for almost 12 years, was abruptly canceled at the end of June, he revealed to the conservative news site Gateway Pundit on Wednesday. He showed GP a copy of the letter he was sent, justifying the move by the bank “discovering adverse past or present legal action involving an individual or entity associated with the account.”

The only “legal action” currently involving Tarrio is a misdemeanor charge of property destruction and weapons possession, after he allegedly burned a Black Lives Matter banner in Washington, DC last year. He was detained over that incident on the eve of the January 6 riot at the US Capitol and ordered to leave DC.

“I don’t know if I’m numb to getting banned off platforms already or this is acceptance to the way of the new ‘West’. I don’t know what it would take to finally get Republicans united in speaking up and legislating against this unconstitutional and inhuman practice of definancing conservatives. Maybe if it would happen to them… because it will… they’ll start doing something about it,” Tarrio told GP. “For now I will do what any entrepreneur would do… and that’s find a temporary solution to this problem until it gets fixed.”

Insofar as Tarrio’s “definancing” has been noticed, reactions to it have mainly expressed concern. More than a few online commenters worried about a Chinese-style “social credit” system being de facto applied in the US. Others pointed out that between businesses refusing to accept cash and providers banning people, those with viewpoints deemed “unacceptable” by the corporate world would be prevented from buying anything, “by design.”

“Whether you like Tarrio or not, having banks banning people for ideological reasons sets a dangerous precedent,” one commenter wrote, pointing out that the financial industry is heavily regulated and congressional Republicans could and should do something to put an end to these practices.

Whether you like Tarrio or not, having banks banning people for ideological reasons sets a dangerous precedent. Given that this is a heavily regulated industry, Republicans in Congress could easily put a stop to this kind of thing if they wanted. They better do just that. https://t.co/BJOH22Fosl

So far, the GOP hasn’t – not even when their own congressional candidates were affected. Last month, Wells Fargo closed the accounts of former House candidate Pete D’Abrosca and former Senate candidate Lauren Witzke.

The bank insisted it “does not consider political views or affiliations in making account decisions,” but declined to specify the reason behind the decision citing “confidential customer information,” saying only that it was “handled appropriately.”

As major Silicon Valley platforms banned people with heterodox politics, their defenders argued they are immune to the First Amendment as private companies, and those deplatformed should just “build their own.” When conservatives tried just that with Parler, the platform was first kicked off the Google and Apple app stores, then taken offline by Amazon’s cloud services.

Also on rt.com ‘Cancel them before they cancel us’: Gab CEO says banks have banned platform due to media smears

Gab, a Twitter competitor set up in 2015 – before the era of political deplatforming – has also run into “definancing” troubles, with CEO Andrew Torba revealing in February that three banks have either dropped them or refused to do business with them, citing negative press attention. Two more banks have done the same since, Torba has said.